ESPEC provides products and services to customers engaged in project to preserve biodiversity, aiming to create a sustainable society. We are working to train personnel who consider and act for the environment in order to develop the human resources needed to support the future.

In 1997 we celebrated the 50th anniversary of our foundation and also set up the charitable trust "ESPEC Foundation for Global Environment Research and Technology"; fiscal 2017 marked 20 years since its establishment. This foundation funds research and technological development related to global environmental preservation, as well as education and enlightenment on reforestation. It has been involved in 240 projects so far and disbursed a total of ¥123.15 million. In fiscal 2018, we funded 19 projects out of 133 proposals.

We have opened the ESPEC Green School and is coordinating efforts to train environmentally-minded leaders. The school holds seminars and events throughout the country. It has provided education to a total of 12,282 students (as of March 31, 2019) through human resources certification projects based on the Environmental Education Promotion Law.

The Green Schools project conducts classes at elementary schools and other schools across Japan regarding “green curtains,” during which the students actually plant bitter melons to help prevent global warming. 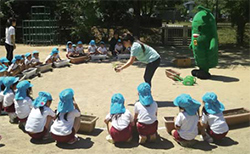 Training Seminars for Leaders on the Creation of Forests Since FY2011, we have been using ESPEC Forest* as a training site to hold, with the support of Kwansei Gakuin University, "ESPEC Green School, Training Seminar for Leaders to Promote the Creation of Life-Saving Forests."
This seminar, which consists of classroom lectures and practical training, is held four times a year (spring, summer, autumn, and winter) and is part of the curriculum of Kwansei Gakuin University.
From fiscal 2017, we will be promoting the preservation of biodiversity through the creation of life-saving forests to an even wider audience, by opening participation in the seminars to not only Kwansei Gakuin University students but also company employees in charge of environmental conservation, NPOs, NGOs and the general public.

ESPEC has signed an agreement for the usage and preservation of forests with the Kewara community association in Ōe Town in Fukuchiyama City, and together we are working to preserve forests in the area through the Kewara Forest Creation Initiative. Over 1,000 people have taken part in the Kewara Forest Creation Initiative in the 10 years it has been running. We will continue with our preservation activities to protect the lush natural surroundings of Kewara and make its forest area even more beautiful, such as creating a walking course and adding other features.

● An Award from the Contest for Corporate Activities on Biodiversity

In December 2017, the Kewara Forest Creation Program was awarded the National Land Afforestation Promotion Organization Director’s Prize at the 6th Contest for Corporate Activities on Biodiversity.

In March 2018, the Kewara Forest Creation Program was certified as an affiliated business by the Japan Committee for the United Nations Decade on Biodiversity (UNDB-J).

* Certified as a recommended business by the Japan Committee for the United Nations Decade on Biodiversity (UNDB-J).

Together with ESPEC MIC Corp., we have developed a new program which aims at providing a diagnosis on Kigyo no Mori (forest of companies) and green areas and provide advice on future biodiversity conservation activities. It is possible to identify the unique charm and challenges of such areas from the perspective of nature restoration experts and create an action plan that can best support such restoration. Services will be provided as a simple program that is easy to implement so that it can be used to spearhead biodiversity conservation activities and support company initiatives.

Participation in a Biodiversity Working Group

Starting from FY 2015, ESPEC has participated in the Biodiversity Working Group of the Environmental Strategy Liaison Committee, which is composed of 4 electrical equipment and electronics organizations*. This working group carries out activities for biodiversity preservation as a collaboration among industry organizations, and ESPEC has used its advanced activities as a reference for further improving the level of its own projects.

In December 2018, the Excellence Award in the Communication Category at the Biodiversity Action Awards* 2018 was awarded to the"Let's Try Biodiversity(LTB) the first biodiversity conservation activity for companies" project of the Biodiversity Working Group of the Environmental Strategy Liaison Committee, which is composed of 4 electrical equipment and electronics organizations.

In recent years, there has been a serious increase in forest damage caused by wild animals. Among other damaging activities, deer eat and destroy agricultural crops and peel off the bark from trees to eat it. Since 2013, the employee cafeteria of the Fukuchiyama Plant has offered a lunch menu that sometimes features wild venison caught locally.This initiative aims to make employees think about damage caused by wild animals as an issue that also affects them.