Our important values that have been passed on since our inception are systematically presented as THE ESPEC MIND, and we engage in our corporate activities with THE ESPEC MIND in all of our decisions and activity guidance.

The Origin Aim for better value exchange as a public institution

Reason for existence as a corporation

The corporation is a public institution, existing in order to meet the expectations of people and society as a whole. Likewise, "providing more certain Seikankyo" is the social mission of ESPEC. We also feel that improving value exchange with stakeholders effectively increases the value of the company as a social instrument and helps to realize people's happiness.

This is the eternal theme that ESPEC pusues

With "Environmental Creation Technology" as its core business, the mission at ESPEC is "to provide more certain Seikankyo."
Seikankyo refers to an environment in which all living creatures can live, or machines and tools designed for a certain purpose can perform their specific function sufficiently. It is a word created by us at ESPEC. This is because the business of ESPEC is so unique and original in itself.

Corporate stance toward realization of the mission

The ideal stance in ESPEC's corporate activities is "progressive." Even before the term "environmental testing devices" existed, those who preceded us at ESPEC detected the need for such and positioned it as the lynchpin of our business. Accordingly, being "progressive" is the corporate stance we have placed importance on and it represents tradition that will be passed on to subsequent generations.
Along with "progressive," we also place great importance on the corporate stances of "reliable," "open," and "fair."

What we promise as a responsible corporate citizen

We have clarified to what we must adhere and what we must respect as we expand the range of our corporate activities. These are "the law," "culture," "human rights," "the environment," and "education/enlightenment."
For example, "the law" does not mean that we at ESPEC can do anything as long as it does not go beyond the range of the law. Social conscience and the thinking of individuals rest on the law, and ESPEC conduct our activities in these respects. Moreover, the interpretation of ethical norms and the like often differ depending on the country or region. In such cases, we choose to engage in activities that are of a more social nature. Similarly, we actively try to adhere to such principles in terms of "culture," "human rights," "the environment," and "education/enlightenment." We express our motivation to implement these principles and foster growth in these respects to society as a "declaration."

We started our business in 1947 right after World War II in order to manufacture scientific equipment.
We built a work shed on only about 16m² of land in Osaka, a city that was a field of ashes. And it was from this modest beginning that we embarked on many a challenge.
We have experienced success and failure, joy and sadness, as well as bitterness, as we have grown over the years one step at a time.
Capitalizing upon the technological knowhow we developed in scientific equipment, 10 years after our inception we steered our operations toward environmental testing devices.
The term "environmental testing" was not even part of the Japanese language at that time.
We built the first environmental testing device based on a motto of "Doing What is slightly different sooner than others."
This translates into a progressive identity and supports ESPEC's activities in all different aspects.

In 2003, we constructed the ESPEC History Hall P3 on the site of our Fukuchiyama Plant. It was done in order to pass on the single-minded passion and progressive DNA of our ancestors to future generations. We have recreated the office we had when we first started, and have placed a large number of products and photos on display. 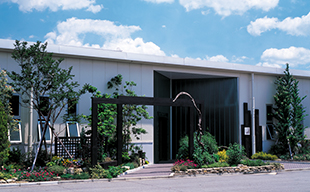 The Origin of Our Name, ESPEC

1980 As part of our CI (Corporate Identity) Plan, we establishment our current logo, ESPEC, which would eventually become our company name.
Setting a goal of three characteristics we wanted our company to have, i.e., progressive, international, and intelligent, ESPEC was created as a word to express what we felt about these three characteristics. It was selected as the word that best matched our image in surveys targeting individuals in dozens of countries throughout the world.

1988
Creation of the group song, "We are on the Way"
2002
The group song was reworked along with renaming to ESPEC CORP. and establishment of new logo.
It was arranged to create a female vocal version that features a beautiful lilting voice, a male vocal version in the rock style, and an instrumental version creating a quiet, adult atmosphere. The song is played on the PA system throughout the company before the start of work every morning. Some employees form their own bands and play the song, indicating how close the song is to them.

Group Song: We are on the Way

All you dreamers, listen to the call of the birds.
Tell us all your hopes and dreams.
Time flows for all of you.
ESPEC, ESPEC

Alert to the challenges to come.
We are a team like no other.
Our mission accomplished as one.
We are ESPEC, We are on the way.

All you dreams, listen to the sound of the waves.
Tell us about the age to come.
Time flows for all of you.
ESPEC, ESPEC

Let our message be clearly heard.
We are a team like no other.
To us, quality is more than a word.
We are ESPEC, We are on the way.